Since it is exactly the kind of straightforward question that can be easily approached with a tool I have been working on recently that simplifies quantitative content analysis of textual materials available online, I gave it a spin… and here are the results. END_OF_DOCUMENT_TOKEN_TO_BE_REPLACED

The language laws introduced in Moldova in 1989 are frequently mentioned in publications dealing with inter-ethnic relations or language issues in the country or with language policies in the post-Soviet space more in general (a short reference list is included at the end of the post).

Understandably, none of them presents in detail each of these laws. However, for my own research, I decided to go through some of them.1

Below, you’ll find a short summary of the main provisions of individual language-related laws approved in 1989-1990, or later amendments and clarifications. Translations are my own and brevity comes necessarily at the expense of details, so I included links to the original texts for further inspection. END_OF_DOCUMENT_TOKEN_TO_BE_REPLACED

In 2004, the Carnegie Moscow Center published a book titled “Russia: the next ten years” . In the introduction, Kuchins makes clear that the aim of the publication is not “to predict” what would happen in the following ten years but rather “to elucidate the context for critical choices for Russian policymakers and the Russian people” (p. 10). However, many of the contributors tried to picture the Russia of 2014, often presenting both a more optimistic and a more pessimistic scenario. END_OF_DOCUMENT_TOKEN_TO_BE_REPLACED

Some of these lists gather a considerable number of sources (e.g. the Abkhazia interest list already includes more than 40 profiles and pages) while others include just a few.

These lists will be updated and will present a wider selection of resources. Indeed, you are welcome to send suggestions in the comments section below, by writing me at [email protected] or tweeting @giocomai.

END_OF_DOCUMENT_TOKEN_TO_BE_REPLACED

Representatives of authorities in all four post-Soviet de facto states issued statements in favour of Crimea’s referendum as an expression of the right to self-determination and declared their hope that this will contribute to a shift in international law. South Ossetia and Transnistria explicitly supported also Crimea’s annexation to the Russian Federation, while Nagorno Karabakh and Abkhazia refrained from doing so, at least for what concerns official statements issued so far.

It is worth noticing that none of them declared in this context its intentions to follow the steps of Crimea and apply for accession to the Russian Federation in the immediate future (in spite of the fact that, according to surveys, this is the option favoured by a clear majority in South Ossetia and a plurality in Transnistria).

END_OF_DOCUMENT_TOKEN_TO_BE_REPLACED

– Coming from Zugdidi, no passport control whatsoever from the Georgian side. Just a man standing near a post. On the way back, I was asked my passport, job title, and, funnily, phone number.

– In Gali, roads are in terrible conditions, plenty of potholes, asphalt rarely to be seen. Just out of town, as soon as the Gali districts ends, a good recently asphalted road starts… done just a few months ago.

END_OF_DOCUMENT_TOKEN_TO_BE_REPLACED 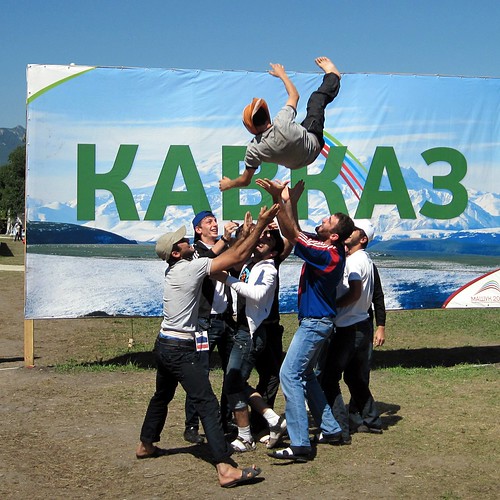 The basic idea of the forum is rather interesting… all participants come from the Federal District of the Northern Caucasus (Stavropolskij Kraj, Karachaj-Cherkessia, Kabardino-Balkaria, North Ossetia, Ingushetia, Chechnya, Dagestan) plus, at least in the original project, Abkhazia and South Ossetia.

The programme includes training and classes dedicated to “intercultural interaction” that all participants must attend. Basically, participants from different parts of the Russian Caucasus are given a chance to know each other better, to discuss about the stereotypes they have about each other, and so forth. END_OF_DOCUMENT_TOKEN_TO_BE_REPLACED

I’m sending this post while listening to the concert that closes the youth forum Mashuk 2010 (in Pjatigorsk, Stavropolskij Kraj) open to participants from Stavropolskij Kraj, Karachaj-Cherkessia, Kabardino-Balkaria, North Ossetia, Ingushetia, Chechnya, Dagestan as well as (at least in theory) Abkhazia and South Ossetia. 2000 participants planned (but the actual figure is somewhat smaller).

This year a number of youth forums and youth camps has taken place in the northern Caucasus. They have been different in size and scope. Putin explicitly called for the organizations of this kind of events in the Northern Caucasus. Most of them were supported by the Russian government, by Mr. Khloponin, head of the Federal District of the Northern Caucasus and/or by Federal Agency for Youth affairs headed by Vasilij Jakemenko.

I’m writing down some thoughts about this forum, but in the meantime, I’d like to share this…

In May, the final stage of the “Student’s Spring” has taken place in Nal’chik, capital of Kabardino Balkaria, a festival that involves “creative students” (singers, dancers, actors, etc.) from about 70 Russian regions.

On July 18-23, Nal’chik hosted the youth forum “Kavkaz 2020”, a forum planned for one thousands participants coming from all of the Russian federation (but where North Caucasus republics were disproportionally highly represented) organized by Russia’s dominant party Edinaja Rossija and its youth branch Molodaja Gvardija and largely sponsored by the regional and federal budget.

On July 23-31, the Russian Congress of Caucasian Peoples organized a youth forum called “It’s better together” in Dombaj, Karachaj-Cherkessia. Its participants were 200 “young leaders” from the region.

In July, Irex Russia (supported by USAID), organized two forums for young leaders in Kabardino Balkaria…in total, about two hundreds participants between 14 and 24 years old coming from all the territories of the Northern Caucasus.

On August 22-28, youth forum “Volga 2010” has been organized in the Volgograd region in collaboration with Edinaja Rossija. It is planned for about 1500 participants… apparently, and funnily enough, participants come from 40 Russian regions, as well as from “Abkhazia, Czech Republic, Italy and Japan”.

For September, another youth forum has been organized in the Astrakhan region (Selias 2010), dedicated to young people from the Caspian region, including people from southern Russia/northern Caucasus as well as international guests from Kazakhstan, Turkmenistan, Iran, Azerbaijan.

But probably the biggest of them all, and the one more openly supported by the Russian Federal structures, is the youth forum “Mashuk 2010”… planned for 2000 people, it is now drawing to its end in Pjatigorsk, in the territory of Stavropol’ (the forum started on August 8 and will close on August 26). 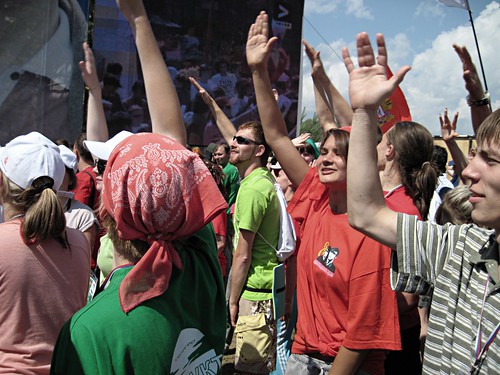 My reportage about the International Youth Forum Seliger 2010 is now online on balcanicaucaso.org (available in Italian here).

You can find some pictures there or on my Flickr page. I already shared some considerations on my way back from the forum in a previous post… And here's another recent article about youth policies in Russia as a whole and in the Northern Caucasus in particular, that makes reference to Seliger.

Preliminary notes written on a bus from Seliger to Moscow. Pictures will follow in the next few days. Seliger is the location where in the last couple of years the Russian government, through its Federal agency for youth affairs, has been organizing summer camps for young people from all over Russia. The same location was previously used by the much discussed youth organisation “Nashi”. – first international camp run by the Russian government. Thousands of participants from dozens of countries (89 according to what President Medvedev said speaking at Seliger on July 8). – goal of Seliger in 2010 and previous editions: to bring together young people from all over Russia, offer them a chance to show their ideas and talents, do networking and obtain support for their projects directly from the country’s leadership,without filters or limits imposed by their social or geographical position (social lift), support the current leadership of Russia and the current political course, promote healthy lifestyle (lots of sport activities, ban on alcohol drinking), promote family values (with weddings strongly encouraged to take place during the camp). A success? -goals of the international camp at Seliger (or why a patriotic youth camp was opened to hundreds of people from all over the world):
* to break stereotypes about Russia among foreign guests (declared goal…a failure? Large portraits of Russia’s leaders ostensibly on show; camp awakened in the morning by Russian anthem played through loudspeakers all over the place; strict rules that, albeit in practice softened for foreign guests, were often “imposed” by group instructsors as orders under threat of expulsion and without explanation; lots of communication problems; predominance of Russian, in spite of the prior promise that the official language of the camp would be English to any effect; old busses bringing guests to and from the camp; etc);
* to show off the fact that young people from all over the world decided to come to Russia, promote Seliger and similar initiatives among Russia’s youth, also by broadcasting news about the event on state tv, promote Russia’s current political course (undeclared goal…a success?);
* to give a chance to young people from all of Russia to meet people from all over the world, hear different point of views and push them to think global (?) – elements to be stressed:
* strict rules and huge portraits of Putin and Medvedev are a reaction to what happened in the 1990s in Russia and are an expression of the current political phase in the country;
* keywords promoted: competitivity, modernisation, innovation, open society (change with the past);
* youth camps, friendship of the peoples, “cult of the leader”, but different approach, different rhetoric (some continuity with the past)
* widespread patriotic and pro-Russian rhetoric (but except for the decorations, no explicit “putinist” propaganda in the speeches or in the activities organised);
* seliger is a fun and beautiful place…windsurfing, kayaking,climbing, shooting, disco parties, beach volley, swimming… wonderful nature, on the shore of a lake, extremely long daytime (white nights)
* most participants said this is an incredible experience,and something they haven’t seen before, for its size and scope. Seliger as a symbol of the current political phase. Focus on economic development and innovation. But calls to build an open society are mixed with patriotic slogans and references to Russia’s current leaders.
Older Entries Newer Entries
Tweets by @giocomai