– Coming from Zugdidi, no passport control whatsoever from the Georgian side. Just a man standing near a post. On the way back, I was asked my passport, job title, and, funnily, phone number.

– In Gali, roads are in terrible conditions, plenty of potholes, asphalt rarely to be seen. Just out of town, as soon as the Gali districts ends, a good recently asphalted road starts… done just a few months ago.

– There are just a very few busses from Gali to Sukhumi, some marshrutkas…nothing compared to the constantly running marshrutkas shuttling between Sukhumi and Psou. Feels detached from the rest of the region.

– Construction boom nowhere to be seen in Sukhumi. A few bars and restaurants opened on the promenade, but that’s it, no major reconstruction (or demolition) in sight.

– Somebody’s been talking about the fact that Ankvab has started fighting corruption, removing some people from high post. Somebody made me think about the fact that if you want to fight corruption, you do declare that you’re firing him/her for taking bribes and you bring him to court. No one taken to court -> no fight on corruption -> he’s probably just putting his own people to high posts, or removing people he actively disliked.

– Increasing efforts to strenghten Abkhaz lanugage. But still, not enough teachers. And Sukhumi is predominantly a Russian speaking city.

– While I was in Sukhumi a total blackout lasting for a couple of hours took place, probably in connection with heavy rains in the previous days.

– Many local NGOs benefit of EU funding through Coberm. EUMM stays on the other side of the boundary line, but EU still somehow there.

Random pictures attached to random notes… Cows come back from Inguri, the bridge on the Inguri, domino players in Sukhumi, Sukhumi promenade.

I’ll put online many more pictures soon. Interviews and articles to be published in the next few weeks @balkanscaucasus (www.balkanscaucasus.org) 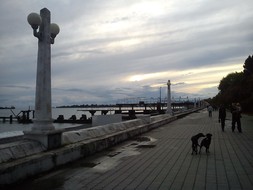 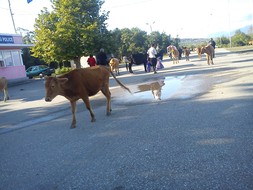 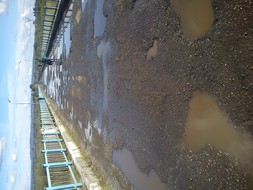 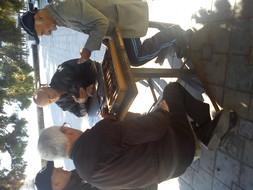