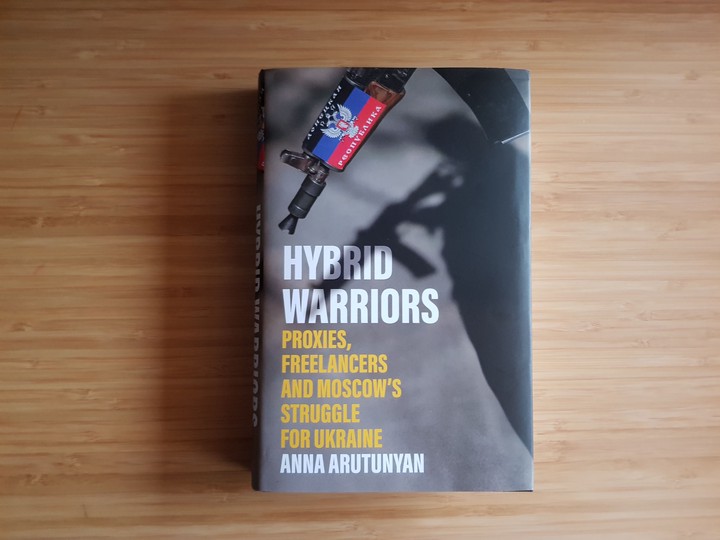 What were the proximate dynamics that made possible what took place in the Donbas between 2014 and 2022? And what has even happened? An important part of the answer is convincingly outlined in Anna Arutunyan’s excellent latest book

On 24 February 2022, Russia launched a full scale invasion of Ukraine, with all its military branches officially deployed and a rambling Putin speech that officially declared… not war. Rather, Russia’s president launched a “special military operation”. He sounded as if he was boldly stating his goals, but they were expressed using fuzzy concepts such as “denazification” which did not lead to much clarity about what it really was, in practice, that he hoped to achieve with the invasion. Once again, even in this most decisive of moments, the Russian president was revealing a fundamental feature of his decision-making process: Vladimir Putin likes to make choices as late as possible, and, even then, express them in a way that leaves leeway for adapting course and that shifts responsibility for their implementation onto expendable subordinates.

Reading Anna Arutunyan’s latest book – “Hybrid Warriors. Proxies, freelancers and Moscow’s Struggle for Ukraine” – I felt that this peculiar decision-making process, or rather, the reluctance to make clear-cut choices, has become almost as much a determinant of the course of events as the Kremlin’s actual preferences, whatever they may be.

At the most basic, here is how the process seemingly goes. After much nervous fidgeting and without meaningful consultations outside of a close circle of associates, a big decision is eventually made: in 2014, to annex Crimea, in 2022, to launch a full-scale invasion. And then, the usual pattern takes over: fuzzy and deniable goals stem from the Kremlin while subordinates scramble to make sense of them and find themselves busy working on seemingly incoherent policy objectives. As was the case in the Donbas in the Spring of 2014, agents eager or convinced to be implementing the Kremlin’s will end up spending a lot of time trying to make sense of what it is, exactly, that the Kremlin wants, waiting for orders, instructions, or clear actions from above that will hopefully give meaning and direction to events. Often, nothing of the sort actually arrives.

Reading Arutunyan’s account of events, I noticed two fateful dynamics that apparently stem from this pattern. The first is a piece of truth that may be well known to chronic procrastinators, i.e. that delaying decisions often reduces room for manoeuvre, limits options, eventually forces more unpleasant choices, and leads to undesirable outcomes that could have been easily prevented if a clear choice had been taken earlier.

The second leads to the very core of Arutunyan book. The fuzziness with which preferences are expressed, the inordinate delays in clear-cut decisions, and the plurality of actors involved creates perhaps unexpected space for the agency of individuals or small groups when they have strong opinions of their own that are not clearly in contrast with those of the Kremlin. It is when the Kremlin cannot decide if a course of action is desirable or not, neither officially sanctioned nor explicitly condemned, that this agency can grow out of proportions.

This is seemingly what happened when Igor Girkin, aka Strelkov, entered Ukraine accompanied by 52 armed men and went on to capture government buildings in Slovyansk. In Arutunyan’s book, Girkin may be many things - including a war criminal for his involvement in the downing of MH17 flight - but he was also a believer on a mission, certain to be acting for the good of Russia, ready to do what Russia’s leaders were not courageous enough to do, but also convinced that the Kremlin would come to his support in due time acknowledging the righteousness of his cause.

This dynamic does not apply only to Strelkov. As the rebellion in the Donbas went on, the Kremlin did not give unequivocal signals about the events, leaving a void that made it possible for various other actors to express their own agency. Figures such as nationalist businessman Konstantin Malofeyev or Sergei Glazyev, an advisor in the presidential administration, could make the most of their position by financing and supporting local rebels through their own connections and resources. Perhaps, the Kremlin approved of their actions but remained silent to maintain a degree of deniability and prevent new sanctions. Or perhaps, following an established pattern, Putin just took a wait-and-see approach, shying away from making a decision for as long as possible.

Either way, lack of a clear stance from the Kremlin was excruciating for many of those involved, including those believing they were acting in the best interest of Russia.

In one of the most memorable scenes recounted in the book, Arutunyan details how she inadvertently ended up in the same room where in May 2014 a group of deputies in Donetsk were discussing if they should proceed with their plans to hold a referendum on the independence of DNR and how they should interpret a recent public statement by Vladimir Putin, who publicly asked to postpone the referendum - supposedly - in order to give dialogue a chance. From her direct observations, it appears that the people who were actually deciding if they should hold the referendum or not were not receiving any secret directive clarifying either way what it was that the Kremlin really wanted. Evidence of coordination between the Kremlin and officials on the ground was everywhere to be seen in Crimea just a couple months earlier, but not, at the time, in Donetsk. Incidentally, here also lies a key difference with 2022: when it was time to organise something with the appearance of a referendum in the newly occupied regions of Ukraine, the Kremlin clearly said so, and its minions duly complied.

By not taking a clear stance on what was to happen in the Donbas in the spring of 2014, was Putin really keeping all doors open to take advantage of what would happen? Or was he actually letting events go in a direction that effectively closed doors, and left the Kremlin without good policy options? a situation where, as Arutunyan put it, “he could neither advance nor abandon the Donbas project” (p. 140)?

Eventually, as the Ukrainian side was advancing in the summer of 2014 and threatening to dismantle completely the DNR and LNR, in late August the Russian side took more decisive actions, sending thousands of military personnel (about 6.500 inside Ukraine with 42.000 troops rotating close to the border) and heavy weaponry, effectively changing the tide of war and creating the conditions that led to the first Minsk agreement in September that year.

Arutunyan argues that, by that time, Putin had effectively little choice, and that if he moved to stop the separatist movement, he “would be admitting to having made a series of catastrophic mistakes and could soon be facing a nationalist junta of its own” (p. 144); that “Moscow could not risk the domestic political debacle that would ensue, had it allowed the separatists it had backed in spirit to be defeated by Ukrainian forces” (p. 172); that ultimately, “the only way to end the intensifying fighting seemed to be to send in troops so that the rebel could finally win” (p. 187), and that standing back “would have cost Putin his hold on power at home” (p. 187).

I am unpersuaded by the logic; ultimately, the whole point of not taking openly a stance on events in the Donbas was exactly that of maintaining plausible deniability, not only externally to prevent more sanctions, but also internally, in order to be in the position to leave the rebels and their supporters to their destiny without the need to dismiss senior government officials or admit to have made mistakes. I can see why “having already spilled blood, many [in the separatist leadership and among the militias] felt that they didn’t really have a choice but continue to fight” (p. 142), but I struggle to see how this really applied to Putin in the summer of 2014. At the time, he was still riding the wave of public support for the annexation of Crimea: abandoning to their destiny regions that had comparatively little resonance for the average Russian resident could hardly be seen as a deadly sin.

Even without accepting this logic in full, however, it is not easy to dismiss a lingering feeling that apparently minor events that took place in the Donbas in the Spring of 2014 contributed to set the stage for a slippery slope that eventually led, in combination with other dynamics, to Russia’s full scale invasion of Ukraine in 2022.

Either way, one does not need to accept all of Arutunyan’s points to benefit from the wealth of insights that punctuates her book, written with the flair of a journalist and enriched by the depth and attention to details of the professional analyst.

One of her key contributions is to combine her direct experience on the field as a reporter and analyst working for years in and on Eastern Ukraine and the Donbas, with her deep understanding of the logic that sustains power dynamics in Russia and around the Kremlin - the broader system she explored in her earlier book, “The Putin Mystique”, mixed with the kind of insights one finds in other publications focused on the Kremlin such as Mikhail Zigar’s “All the Kremlin’s men” or Mark Galeotti’s “We need to talk about Putin”.

Shopping around for policies

As Arutunyan argues, it is the peculiar system of power that defines how Putin’s Kremlin works that “has become the defining – and most confounding – feature of his war on Ukraine” (p. 14). Why is it so difficult to understand what the Kremlin wants?

Firstly, the fact that the decisions stemming from the Kremlin “are shaped by his courtiers far more than one would expect in an autocratic system”: different opinions, preferences and approaches can coexist at the same time in the Kremlin. Secondly, a misplaced understanding that “the Kremlin’s ultimate aims are fixed, and can therefore be ascertained and countered” (p. 195).

What we have seen in many occasions is a Kremlin that “was shopping around for a policy and trying to see what works but not confident enough of any plan to back it overtly and wholeheartedly.” It is this constant irresolution and vacillation before difficult choices and the messy insistence on half measures and fuzzy policy objectives that has remained a defining feature of Russia’s invasion of Ukraine in 2022, leading to inconsistent, contradictory and half-hearted policies even at a time when the plurality of voices inside the Kremlin has shrunk.

Some may take issue with the fact that Arutunyan’s book is solidly focused on rebel leaders and how their activities and beliefs interacted and clashed with power dynamics stemming from the Kremlin. Shouldn’t there be more about how Ukrainians looked at these events, or the life experiences of common people caught up by the war but not involved in the rebellion, or what determined the life choices of residents of the Donbas through these difficult years? Perhaps, but that would be another book. Besides, more attention to these aspects would also not add much to our understanding of what led to Russia’s invasion of Ukraine in 2022. Sadly, the preferences of local residents of this region that is so central to the war effort never seemed to be a primary concern for the Kremlin. Indeed, they remain broadly irrelevant for understanding why Vladimir Putin decided to order the invasion of Ukraine in 2022.